Little Charlie did the most amazing things! 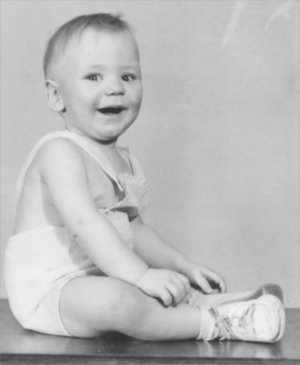 There's quite a few interesting stories about little Charlie that I've heard from my relatives and family friends. Here are some that I consider the best...

On the Road Again...

Mom told me this one. We were coming home from town (probably Independence, Jackson County, Missouri) and we saw a hitch-hiker with his thumb out. Mom said, "Well, he's going somewhere!" I got this idea when I got home to go somewhere... by the time Mom realized I was missing, a truck driver was bringing this little boy up to the house. He reported, "He had his thumb out, trying to hitch a ride!" I think Mom got a good bit of her grey hair that day!

God and the Mysteries of the Universe...

This story was told to me by my third cousin, Rhenda Iris Huntsucker Strub, who heard it from her mother. The "Winnie May" who taught our Sunday School class was an older first cousin of Rhenda (and also my third cousin).

"Winnie May was our Sunday School teacher at Six Mile Baptist Church. My favorite Charlie story involves her. Mom says when we were not yet four years old and in Winnie May's class she gave all the kids crayons and paper one Sunday morning and asked us to draw a picture of God. Well, I turned out a beautiful scribble any four year old would be proud of, but you, you sent poor Winnie May screaming from the room and into the congregation after the preacher. Seems you had created a rendition of the solar system with each planet in its proper place, appropriately scaled and labeled. Winnie May was convinced you were possessed of the devil and wanted nothing to do with you, my friend! Mom says it was the funniest thing she ever saw. Winnie May hysterical waving this paper around. People looking at her like she'd lost her mind. Little kids crying and moms scooping them up. Finally, the preacher calmed her down and convinced her you were gifted, not possessed. But, they put somebody else in the Sunday School after that."

I must have a good memory, because after reading this I remember drawing a picture of the solar system in Sunday School class and never getting to finish it. I also remember something about putting an arrow on one side because "God's out THERE."

In School with the Blind...

One day after my first few days of kindergarten, I came home very worried.

I told Mom, "They put me in a class with blind people!" My mother was somewhat perplexed and asked, "Why do you think that?" My reply was, "Nobody else in the class can read!" Mom then explained to me the difference between "illiterate" and "blind."

I also was somewhat surprised that "we are going to take all year to count to ten!"

They were out of Tin Cans...

When I had my tonsils out, my doctor wanted a routine urinalysis. My mother helpfully translated that to the patient (me) as a request to "go to the bathroom in a tin can."

Well, when I got finished, I had a question about the validity of my lab work. "They were out of tin cans, so we had to use an Erlenmeyer flask instead. Is that OK?"

The Patient's Evaluation of His Condition...

My personal opinion is that I had the worst tonsils ever seen in the history of the medical profession. I was quite happy to get rid of them in 1961, just short of my sixth birthday.

The state of the medical art wasn't as advanced in 1961 as it is now. Then, a tonsillectomy then involved an overnight hospital stay. In my case, this was at the Independence Sanitarium and Hospital, where I was born. One of the big reasons was that the anesthetics of the day took much longer to wear off than what they use now.

Well, my surgeon dropped by to make his rounds as I was getting breakfast in bed. I was still quite uncoordinated from the anesthetic, so I was getting spoon-fed all sorts of soft, tasty stuff that wouldn't irritate my only mildly sore throat. Also, all us sick kids got a present from the hospital. Mine was best described as a "MONSTER" as that was what I always called it. No feet, no arms, lots of blonde hair, two big eyes, and an even bigger mouth. Sounds like your typical monster, doesn't it?

His first question was, "How are we doing today?"

He then got Mom off in the corner and asked if she told me to say that. Mom said something to the extent that she was as surprised as the surgeon was. This got written up in the Kansas City Star but somehow we never saved a copy. I've made comments about looking it up in the microfilm archives of the paper but I never have.

I loved the "monster." By the time I got old enough not to sleep with the monster, I'd loved off one of the eyes and a good bit of the hair!

Counting to One Hundred...

When I came back to school in the second grade, our second grade teacher did some evaluations to see how much we remembered from the first grade. One of the things we were assessed on was our ability to sort the whole numbers 1 through 100 in order.

My second grade teacher had many years experience giving this test to little kids. Up to now, they searched out the "1" and placed it in the first slot. Then, they found the "2" and so on until they reached 100.

Not little Charlie! I first found the "83" and placed it in the third column in the eighth row. Then, I did the same with the other 99 numbers. My second grade teacher had done this many times, but I was the only one that took that approach.

The Oath of Hypocrites...

When I was a little kid, I was reading a book about the founders of medicine: Galen, Pasteur, and above all Hippocrates. I wasn't certain how to pronounce that long name. I had heard of "hypocrites" but hadn't noted the difference in spelling.

Well, the next time I went to the doctor, I asked him about the "Oath of Hypocrites." (Or that was the way I pronounced it.) He had to think about that one for a few seconds, then he explained: "It's pronounced HIP-POC-CRA-TES!" Then, he proceeded to tell me about the Oath.

Back to "Charlie, the Sneaker Freak!"