adidas has created a series of shoes named after great cities: One set for North America, another for Europe. Interestingly enough: 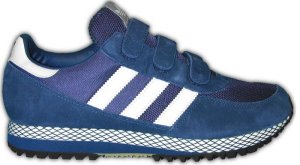 The Dallas is a retro-style running shoe with Velcro instead of laces. Dallas? It's the big city that embodies Texas in popular culture. Personally, I think the shoe should have been a slip-on... look at cowboy boots some time!

An early training shoe that has been periodically reissued in various colorways. Some include:

An early 1970's training shoe with an outsole similar to the adidas Gazelle. Gray with orange stripes and an extensive black sidewall. It was notable for having a fold-down heel.

The New York sneaker from adidas is a retro-styled running shoe. Ironically, the New York is widely available in Europe but the European-city shoes are for all intents and purposes unavailable in the United States. On the other hand, one might be able to find them in New York City... some of them are also available in San Francisco.

As to "New York" for a name? Home of a famous marathon, the undisputed financial center of the world, one of the major cultural centers of the United States... why not?

This particular version is different than the other versions shown here. Differences include: The style name is on the rearmost stripe (not the heel like the first three examples); Dellinger Web; Trefoil ("pot leaf" Originals) logo and not the Performance (triangle) logo.