Chuck Taylor gets ready for the next millennium

A classic gets a technology update:

As my readers know, I give the Converse "Chuck Taylor" All-Star credit for being the most popular sneaker of all time. I have also said that this venerable sneaker needed an update to take advantage of modern biomechanical technology.

The All Star 2000 features classic styling, aesthetically merged with some of the most modern athletic shoe technology.

Converse has risen to the call. The All Star 2000 carries on the classic "Chuck Taylor" label and does it well. Reports on the USENET alt.clothing.sneakers newsgroup indicate that the All Star 2000 has been the fastest selling basketball shoe in Converse history. 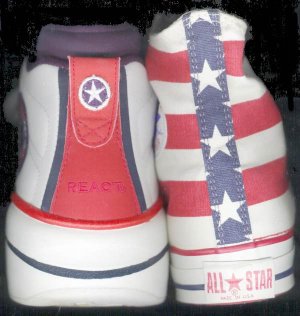 The All Star 2000 provides abundant cushioning between the foot and the floor. While the All Star 2000 definitely qualifies for the "mid-high" designation, the shoe rises as high as the high-top version of the classic All Star. (NOTE: the edge of the dark blue "horse collar" rises above the blue heel tab.)

The classic "Chuck Taylor" All-Star always did a good job of gripping and grabbing the floor. The All Star 2000 does likewise, but incorporates many technological improvements.

The All Star 2000 incorporates strategically placed flex grooves. It also uses an updated sole material that should show greater life than the original All Star sole under heavy use.

The heel of the All Star 2000 incorporates one of the three "Chuck Taylor" logos on the shoe. The yellow chamber is filled with Converse "REACT" fluid, adding to the cushioning of the shoe. The chamber wall is recessed and thick, hopefully preventing the leakage problems encountered with some shoes using the "REACT" technology.)

It has been pointed out that the All Star 2000 does not incorporate the shoe size into the sole pattern.

If a good shoe has one "Chuck Taylor" logo, a great one has three! 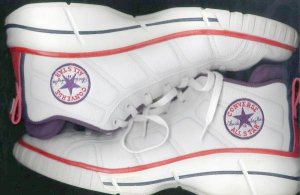 Converse put "Chuck Taylor" logos on both sides of the All Star 2000 shoe, as well as the bottom. No matter what side you see, the heritage will shine forth.

The biggest mistake they made (at first):

On later packages, Converse appears to have recognized this. The bland, generic box got a "Chuck Taylor" logo pasted on the end with the size information. It's still not as cool of a package as the classic All-Star box with the views of the black high-top Converse "Chuck Taylor" All-Star sneaker from five of the six possible sides (front, top, both sides, and bottom).

Later on, Converse finally solved the problem by making a common box design that covers their entire line-up, yet it is not tied to the appearance of any one model.