Look here for more information about Charles H. ("Chuck") Taylor, the real-life man behind the sneaker. 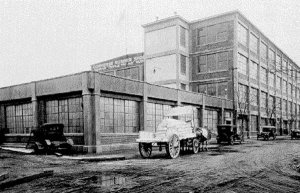 At one time, this was the home of "Converse Rubber Shoes." (Note the horse-drawn wagon and the antique automobile.)

Given the number of years Converse has been producing the "Chuck," it seems appropriate that they have used a number of different box designs.

NOTE: Converse forgot to mention feature #12: The ankle patch provides additional ankle support! If it was strictly for product advertising, it would make more sense to put it on the outside... think about it!

Given that they are (after all) the most popular sneaker of all time, Chucks have been seen extensively:

In 2002, Converse produced a backless sneaker ("mule") based on the Chuck.

Some may call these Chucks "low," but their popularity was high for Baby Boom Boys.

In addition to the low-top version, Chucks come in the traditional and beloved "high-top" design. 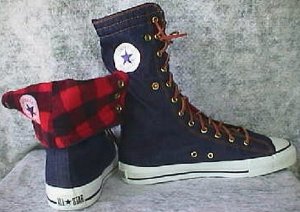 Around 1986, Converse even had a "knee-high" (NEEHI) version. Note the metal snaps on the sides of the shoe. They allowed the wearer to fold down the sides to merely "high-top" level.. Converse produced a similar "XHI" model starting in 2003. Converse made a "mid-high" version in 2011 that was approximately the height of a Chuck patch.

SPECIAL SUMMERTIME FEATURE: Summer come along, and you feel like you want to hang loose and low-topped all summer? A few minutes and a pair of sturdy scissors will convert your high-top Chucks into a pair of low-top Chucks!

Chucks have been known and worn for generations that have found uses for them from A to Z. There have been some changes over the years:

One of my readers complained to Converse that the upper and sole weren't as thick as they used to be. Converse sent him a reply to the extent that "they are made the same way." I've been sent pictures of old Chucks and new Chucks that prove otherwise. And how else can you explain the "All Star 70" that they've been hawking in the 2016-17 time frame?

During the Baby Boom years, basketball season was prime time for the Chuck. My experience as a teenager was that any kid halfway serious about basketball had a pair, either the low-top or (more usually) the high-top. If the teams were named after their sneakers, the great majority of basketball games would have been "Chuck vs. Chuck." As I remember, some teams always wore the low-top version, and some teams always wore the high-top version, and some let the players decide which they preferred. Here's a picture of my high-school friend Randy coming down from on high with the basketball, wearing a pair of red low-tops, and with his opponent in the white high-tops breathing hot and heavy down his neck!

In the Baby Boom years, the girls' basketball team wore Chucks just like the boys did. As you can see, these Baby Boomer girls have their high-top Chucks on... and they're ready to go! 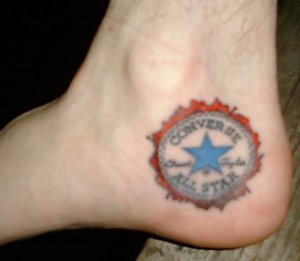 One of my many readers, Michael (I don't think his last name is "Jordan"), sent me a picture of his tattoo. He told me, "I can never be without my Chuck Taylor's."