My parents were born in 1920 and 1923 and they were extremely active for their respective ages. Pop passed away in 2005. Mom is still alive, though she went into a nursing home in 2016 at the behest of her doctors, and moves better and shakes less than I do. We wouldn't be surprised if she reached 100. It also seems that it's nearly impossible to find anything for anyone in the family. One day at work in late 1997, I was discussing that it was hard to get anything for my parents. I'd decided to get Mom a CD player, as her old record player had bit the dust. I wanted to get Pop something other than the usual tie. I was discussing my plight and said, "At his age, I don't think he'd want a pair of Air Jordans!"

I then realized that my father did a lot of walking (at the behest of his cardiologist, who wanted him watching his cholesterol and not clogging up his 1995 bypass surgery) and that he might like a new pair of shoes to walk in. It turned out that Mom thought that was a great idea; she knew he was complaining about his shoes. With my knowledge of sneakers, I figured a pair of Nike Air Max Triax would be quite comfortable and not break me up financially. So, I got him a pair of the very similar Nike Air Max Later II, a store-unique style from one of the major athletic shoe chains. 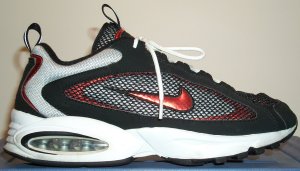 After I wrapped my presents, Pop said, "It's about the size of a shoebox!" (We didn't say anything.) Then, Christmas morning, Pop unwrapped this Nike box. He knew that I sometimes put little presents (like cassette tapes) into bigger boxes to hide them. The big surprise was when there was actually a pair of shoes in the shoe box! As I remember, Pop used them for quite a while.