Hakeem Olajuwon of the Houston Rockets

Hakeem Olajuwon would have likely finished top in the Rookie of the Year voting, except for one thing: Michael Jordan came in first that year. He wasn't as flashy as a lot of other players, but he definitely got the job done. Despite being a multi-millionaire from playing basketball with the Houston Rockets, and very active in product endorsements, he doesn't have a line of high-priced sneakers. Because of his personal concern about incidents of kids stealing and killing to get high-priced sneakers, he doesn't market them. However, Hakeem did have a more moderately priced model on the market. 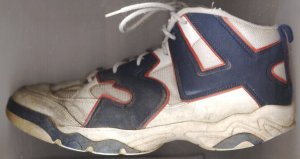 Spalding brought out a Hakeem Olajuwon shoe ("Hakeem the Dream"), featuring Hakeem's number 34 on the side. The list price was a less than nightmarish $35. 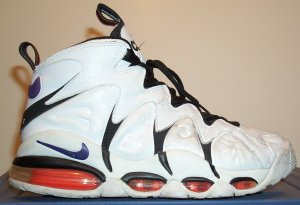 The Hakeem Olajuwon shoe resulted in one of the more interesting incidents in sneaker marketing. In 1996, Charles Barkley went to the Houston Rockets. Since Nike wanted a matching Barkley shoe on the market, they whipped up a shoe in Rockets red-orange and Barkley's Phoenix Suns number 34 on it. Apparently, nobody told the sneaker wizards at Nike that Houston already had a number 34 on their team, and Hakeem wasn't about to give it up. As soon as the guys up in Beaverton got the right jersey number figured out, they quickly came out with the very similar Nike Air CB 4.

Apparently, the first "Hakeem the Dream" shoe sold well enough that Spalding brought out a second model. This one also has the number "34" on it, but not covering the whole side of the shoe. It also has the name "Hakeem" written across the side of the midsole.