Charlie's Sneaker FAQ and Glossary - B

This FAQ and Glossary defines a number of terms used in regards to athletic shoes, Charlie, or sneakers.

Now, they've gotten old many of them need stuff like Celebrex and Mobic... too much wear and tear on the old joints!

Bankruptcy
A financial untimely end for a sneaker company that falls on hard times. There are two different variations for a bankrupt company: Chapter 7 (liquidation) and Chapter 11 (reorganization). A lot of companies try Chapter 11 bankruptcy first, but if it fails they go into Chapter 7 bankruptcy. The most famous sneaker company to go into bankruptcy was probably Converse in 2001, but their assets were acquired by new management. The new company was acquired by Nike in 2003. 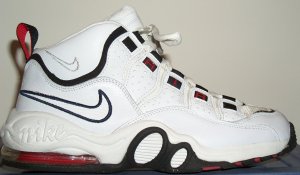 Retired basketball player for the Houston Rockets and former Nike endorser. Nicknames that can be repeated in proper company include "Round Mound of Rebound" and "Sir Charles."
Baseball

Yet another sporting event with its own type of athletic shoes. Here's what they wore to play baseball back in 1931. The metal cleats haven't changed a great deal since 1931... but everything in the design above that has kept pace with technical innovation.
Baseball Boots
A term used for Chucks by some residents of the United Kingdom. I (Charlie) always thought of baseball being a sport that required cleats of some type.
Baseball Keds 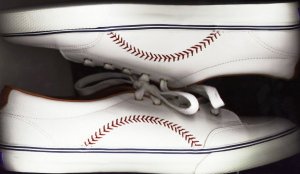 A style from Keds, designed rather much like a boat shoe, but with stitching like a baseball. They were first produced in the late 1990's, then went out of production... to return to the Keds lineup in 2002 and early 2004 (under the name "Pennant"). They must be popular; they are back in 2017.
Basements
Another sneaker slang term for takkies or trainers; around Cape Town, South Africa.
Basket shoes
A term sometimes used for basketball shoes. This should be differentiated from the Puma model named "Basket", which was very similar to the Puma Clyde except being made from smooth leather instead of suede.
Basketball

A game that uses a round orange ball and circular nets mounted underneath hoops; compare to volleyball. Typically played outside in nice weather, or in overheated gymnasiums in the winter. Players typically wear tank tops, shorts, and sneakers. For Baby Boomer basketball before 1970, the players invariably wore Chucks, as in the example to the left. My old school buddy Randy demonstrates how the Baby Boomers played basketball; usually, but not always, in high-tops. They also wore real shorts back then, not a male version of bloomers like Michael Jordan wore. Serious market competition, first from adidas and then Puma Clydes, came along in the late 1960's and early 1970's.

Basketball boots
In Australia, New Zealand, the United Kingdom, and a number of other countries: sneakers for playing basketball. (See "boot.")
Basketball Sneakers, Charlie's Law of Teenage
Charlie's Law of Teenage Basketball Sneakers states: "There is a negative correlation between player height and sneaker price: the shortest teenagers wear the most expensive basketball sneakers." I (Charlie) decided this after observing actual teenagers play basketball.
Bata 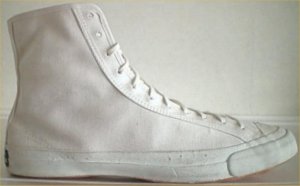 Beach Feet
An alternative to the sport sandal, beach feet combine a rubber outsole with a stretch mesh upper. Nike calls their version of beach feet the "Aqua Sock."
Beaverizing
A derogatory term used to describe when Nike acquires a company and makes them too Nike-like. For example, when Nike bought what was Nike Bauer Hockey and brought out a line of SWOOSH-equipped hockey skates. On the other hand, so far, they've resisted the temptation with Converse.
Beaverton
A suburb of Portland, Oregon, USA. Beaverton is sometimes thought to be the center of the sneaker universe; but the states of  California and Massachusetts also have legitimate claim to that title. Headquarters city of Nike and adidas USA. Also the center of the high-class instrumentation universe, as it is also the home of Tektronix.
Beverly Hills, 90210

A popular television show formerly on the FOX TV Network that lost its basic plot about the time Brandon's 1990 Nike Air Flight basketball sneakers wore out. Based around California teenagers who seem to wear only Nike sneakers, with the exception of Dylan. He's a misfit, not simply because he wears black high-top Chucks and the rest of the cast doesn't. Jennie Garth (the cute actress in the picture) also did an aerobics video entitled "Body Under Construction." Despite the title, it had nothing to do with nose jobs or plastic surgery.

Blue Ribbon Sports
The original name of the company now known as Nike. Sometimes abbreviated as "BRS" and embedded in Nike shoe terminology (such as the "BRS 1000" outsole).
Blue Tips

1970's slang in New York for Converse Jack Purcell sneakers. Also see "Jacks."
Brain-damaged
Board Last
A shoe construction technique where a stiffening board runs the length of the shoe. Results in a shoe with greater stability but lesser flexibility. Many hiking boots use board lasting. Most running shoes use either a combination last or a slip last.
Boat shoes

Canvas CVOs. Called "Bobos" by some in Boston. Also known as "deck shoes."

Footwear, typically brown leather, that a resident of the United States would wear for outdoor activities such as hiking or just to dress casually at work. However, residents of Australia, New Zealand, the United Kingdom, and other countries sometimes use this term to refer to their sneakers, or the trunk end of a Ford.
Bottoming
The process of fastening the upper, midsole, and outsole together during the assembly process. Performed either by stitching or direct injection.
Bowerman, William J. ("Bill") - (1911-1999)
Bowerman Series 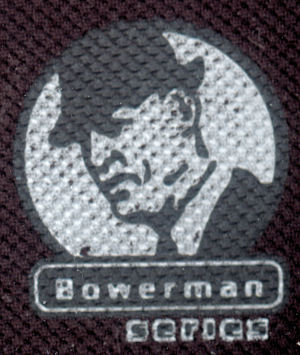 A marketing plan at Nike to keep the runners happy. Shoe designs in the Bowerman Series reportedly will remain unchanged for 12 to 18 months. However, Nike has warned they may periodically change colorways using the Sneak of the Week philosophy.

BRS
Abbreviation for "Blue Ribbon Sports," the original name of the company co-founded by Bill Bowerman and Philip Knight and now known as Nike.
Bruin 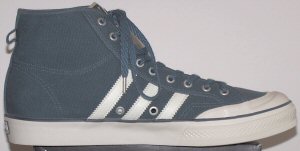 A styling feature found on Buick automobiles for many years; ventilation portholes at the back of the engine compartment, ostensibly intended to keep the engine cool. By extension, the ventilation eyelets on Chucks and some other sneakers. I (Charlie) am not sure whether either set of Buick Ventiports ever worked as intended.
Bullets

A canvas sneaker sold by Bata in the United States in the days that Baby Boomer Boys were buying their sneakers; apparently still in production overseas. I (Charlie) remember that Bata Bullets had their devoted fans.
Bum

Bumper Boots
A term occasionally used by residents of the United Kingdom to refer to sneakers like Chucks.
Buying sneakers
To find a sneaker that is unavailable locally, try mail order.