There seems to be interest in the PF Flyers brand name by my readers, usually spurred when some cable TV network re-runs "The Sandlot." Unfortunately for those who long for PF Flyers, they have not been made (in the classic form) in decades.

The meaning of the "PF" in PF Flyers:

As shown in the picture below, the "PF" stood for "Posture Foundation." 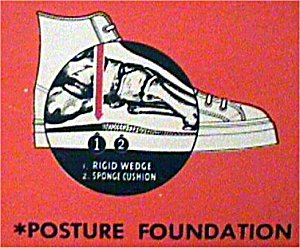 This picture (originally a small part of a store display, but lacking the brand name) was sent to me by one of my readers who asked me, "Was this an ad for Chucks or PRO-Keds?" I had to inform him, "Neither... PF Flyers!" 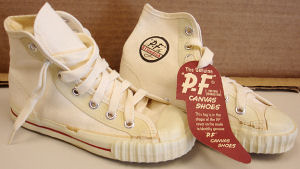 This picture of vintage PF Flyers high-tops was sent to me; I don't know whether they are older or newer than the store display.

This advertisement shows a pair of PF Flyers deck shoes, so the brand was not merely plain canvas low-tops and high-tops.

Here is a picture of some PF Flyers made for the United States Army. The man who sent me the picture told me they are available from time to time as Army surplus, complete with the original packaging. 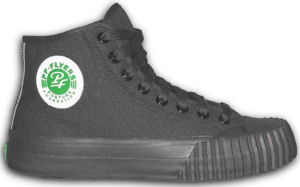 This is an example of a recent PF Flyers reissue. They call this colorway the "Sandlot Edition." 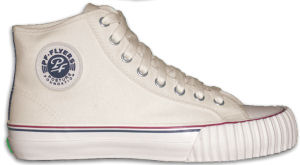 One "feature" worth mentioning: the ankle patch in the reissues are on the OUTSIDE of the shoe!

Over the years, the "PF Flyers" brand name has gotten passed around. Here are some transitions I know of: