In the 1960's, the folk troubadour Bob Dylan told us in his song Subterranean Homesick Blues, "Don't wear sandals, try to avoid the scandals..." Well, they didn't make sandals (or scandals) like this back when Bob wrote the song...

Mark Thatcher invented the Teva sport sandal rather than wear soggy Converse "Chuck Taylor" All Star sneakers river rafting. It is built on a light, thick platform (so that it floats in water). The design has a strap at the front of the foot and two around the ankle. One side strap connects the front and back strap systems. The front and back straps secure with "hook and loop" fastening systems. 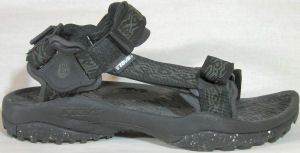 Several other companies have copied portions of the Teva design, while others have gone on to make improvements. Among the companies that have improved the classic Teva design are:

Named after a river and city in Douglas County, Oregon.

Nike, more so than other athletic shoe companies, is likely to improve upon a design.

The pictured example, the Umpqua sport sandal, shows some improvements over the classic Teva design:

As a guess... this is the German spelling of the Deschutes River in Deschutes County, Oregon.

This is the Air Deschütz PR 2 from 1998; the major difference is the closure.

Yet another iteration of Air Deschütz, the 1999 model. Probably my favorite so far.

Yet another iteration of Air Deschütz, the 8th in all, the 2000 model. The name is the same, only the sandal has been changed to confuse the innocent.

This is the 2004 Air Deschütz model. This version is black with gold trim, I have also seen it with red trim.

Two of Nike's 1999 model names, "Rinse" and "Air Spin Cycle," sure imply to me that somebody in Beaverton was looking at a washing machine and was desperate for a name. There was a "Rinse II" but only one "Air Spin Cycle."

The Nike Straprunner has done well enough that it is in its fourth iteration for 2003.

This is an example of the "Straprunner III."

Other Western Rivers and Mountains:

For those who wonder about the naming of the Nike sport sandals: they seem to be named after rivers and mountains in the West. The following come to mind:

Alas, in 2017, I (Charlie) basically got out from Hurricane Harvey with the Teva sandals on my feet. And, when I looked at Nike's footwear range nowadays, the only thing they had in the way of sandals were flip-flops and slides. Guess I'm pretty much down to wearing Teva now, as I neither like flip-flops nor slides. They come off way too easy!

This is the adidas Hellbender sport sandal, black with yellow trim. But, as with Nike, adidas only has flip-flops and slides in 2017.

Under Armour: A recent entrant to the sport sandal market

Under Armour has a sport sandal with straps on the front and back now (2018) with the model name "Fat Tire". I have a pair (white footbed, gray and black straps), but I am not yet set up to take a picture of them.