I remember that one of our engineering cooperative students had a pair of these sneakers right after I started to work at Boeing in Wichita, Kansas in 1977. Later on, adidas reissued them and I bought a pair.

The term "Tobacco" is for the color; the shoes are made of leather, not burnable burley. The adidas "Hemp" sneaker (see below) is indeed made from that plant.

Reportedly, this shoe was first referred to as the "Chronic" (after slang for a drug user). Then, it was first marketed as the "Hemp."

The name changed yet again. Former Federal "drug czar" and ex-mayor of Houston, Texas Lee P. Brown accused adidas of marketing the "Hemp" sneaker to "capitalize on the drug culture." (It's always been thought by some that the adidas "Trefoil" design resembles a marijuana leaf.) After this flap, adidas renamed the "Hemp" as the more politically correct "Gazelle Natural." At least on the example I was able to photograph, the renaming was partial.

The "Gazelle Natural" shoe has the same basic design as the adidas Gazelle, but made with a hemp cloth upper. Proponents of hemp fabric state that it lasts twice as long as cotton, and it can be grown efficiently using few pesticides. The shoes are legal to own, as they contain no drug metabolites. However, all hemp fabric sold in the United States is imported. Because of drug abuse concerns, United States hemp cultivation has been illegal since 1937, except by special permit during World War II. War historians have found a World War II-era propaganda film entitled "Hemp for Victory."

Textile researchers in several countries are developing improved hemp varieties. These new hemp plants yield plentiful fabric but do not have the drug abuse potential of the traditional varieties. In the 1800's, hemp was a perfectly ordinary cash crop. Many farmers grew hemp for fabric. Including at least one in my family tree: Aytchmonde Perrin, my great-great-grandfather, in northern Missouri.

I had a reader of my Web site ask me about this particular shoe. I did some research on it, and here are the details:

The "Super Modified Hemp" looks very much like the "Super Modified" (a black canvas sneaker with white adidas stripes and a "Shell Toe"). Like the "Gazelle Natural", it sports a "HEMP" tag affixed to the back of the stripe nearest the heel. Comparing pictures of the two, this is the major difference.

Like the "Gazelle Natural" before it, the "Super Modified Hemp" did not have mass-market distribution.

This particular model had wider distribution than the Super Modified Hemp. It was available (in late 2005) directly from adidas and other sources.

The Converse All Star Hemp High: 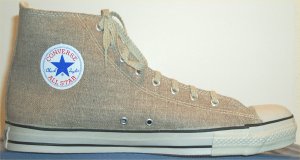 In 2001, Converse made a number of hemp sneaker styles. They made high-tops in khaki as pictured, along with black and olive. They even made low-tops in black and olive, for those who don't want a "hemp high" from their sneakers. 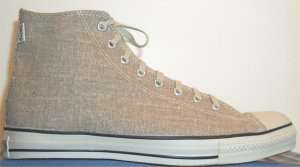 The outside of the All Star Hemp High (the side without the Chuck patch) features a "hemp" tag located at the heel, slightly below the top of the shoe.