I distinctly remember my last semester in high school and a pair of red canvas Converse "Chuck Taylor" All Star low-top sneakers. I first wanted a pair of Chucks in eighth grade, except I wanted unbleached white high-tops back then. Mom refused to buy them for me, commenting that "you don't wear out the bottoms of your shoes, why should I get you a pair with really good bottoms?" Well, only because they were as desirable then as Air Jordan sneakers are in 2017! All my buddies on the basketball team wore unbleached white canvas high-top Chucks except Randy, he absolutely refused to wear high-top sneakers for his six years of junior high and high school! Ironically, Randy's younger brother Ronnie was a wrestler in the lighter weight classes, and when they compete they always wear high-tops.

Over Christmas vacation in 1972, I was getting ready for my last semester in high school, and I needed a new pair of gym shoes. I did have the adidas GYM I mentioned earlier, but they were incredibly thin-soled... no shock absorptive capacity to speak of. I was at J. C. Penney, and they had huge racks filled with Chucks of various colors in their sporting goods department. Mom decided I was old enough to send out shopping without her tagging along.

Our standard gym uniform was based on the school colors: a white T-shirt and red shorts (and, of course, the mandatory Baby Boomer Boy jock). I thought a pair of red low-top canvas Chucks would go nicely with all the above.

I showed off my purchases to Mom and she had a comment about the red low-top canvas Chucks: "At least they're not a pair of cowboy boots!" Even living in Texas, I don't do cowboy boots; Teva sport sandals are more my style.

Well, when I got back to school in 1973, those red canvas Chucks got major attention, particularly among my classmates that were more athletically inclined than I. I think the major reason was our basketball team also wore red low-top canvas Chucks. From what I remember, I was the only non-basketball player to dare to break the red canvas Chuck color barrier! A lot of my classmates had white pairs, however; and a few had black ones. In retrospect, maybe I should have gotten a pair of red canvas high-top Chucks but everybody that I ran around with thought that high-tops were kind of dorky back then (much to the detriment of their ankles). I'm thinking I'll wear a pair of red high-top canvas Chucks to my next high school class reunion and tell the basketball players that I'm wearing the shoe they should have worn for the 1972-1973 season!

My second pair of canvas Chucks... 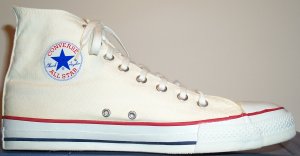 That time of my life was probably the most "low-top" oriented I've been. If I remember right, I got my next pair of canvas Chucks (the always classic unbleached white Converse "Chuck Taylor" All Star high-top shoes) when I was in college. I felt I needed the additional stability to play intramural volleyball, although I would have been better off with a pair of something like adidas Promodel or Nike Blazer high-tops (to mention two contemporary shoes) as Chucks aren't extremely resistant to rolling. The University of Missouri basketball team also wore unbleached white high-top canvas Chucks at the same time. One night, I got tired of studying and went out to run off some of the stress in a field just south of the computer center. Much to my surprise, three young ladies were watching me and made their presence known by cheering me on. But that's another story...