JDI
Sometimes used abbreviation for "Just Do It", a Nike credo frequently mentioned in their advertising.
Jeepers

Store brand sneakers marketed by Sears, Roebuck, and Company to Baby Boomers. Derisively known as "Cheaper Jeepers." Replaced by "The Winner."
Jills
The equivalent of jocks (meaning #1) for women athletes. Formally known as a "athletic pelvic protector" but sometimes called a "jill strap" even though there's no straps to the ones I've seen on the Internet.
Jim Shoe

A sneaker made by Airwalk, best known for three unusual versions (basketball, golf, and tennis): Airwalk also made several other colors with the same basic design, but they're not as obviously matched to a sport as these versions. Wear them to work for kicks.
Jocks
1. Special underclothing that Baby Boomer Boys were required  to wear to gym class. Somebody was really cheap designing them, because they left out the tail end. Being caught without wearing one could result in a track meet. Now optional in many Physical Education programs. Also see "Jills."
2. Athletes. Traditionally, men athletes, but women athletes use the term to describe themselves.
3. ANTONYM: Software weenie (in most cases).
Jocktag
The label on a jock, which is on the outside front of the waistband. By extension, a similar label on the outside front of an athletic shirt.
Joggers
Really slow runners; a sneaker for really slow runners.

Johnson, Michael
Track star and wearer of custom-made gold Nike athletic shoes during the 1996 Summer Olympics.
Jordan
1. See Michael Jordan.
2. The young son of Sheryl Swoopes.
JORDAN Brand
A line of sneakers made by Nike that feature the JUMPMAN logo instead of the usual Swoosh.
Jordan, Deloris
The mother of Michael Jordan. In an ESPN interview, she admitted she occasionally had to "pop" Michael... probably after yelling "Michael Jeffrey Jordan, cut that out!" I (Charlie) just hope she never slippered "His Airness" with an Air Jordan.
Jordan, Michael 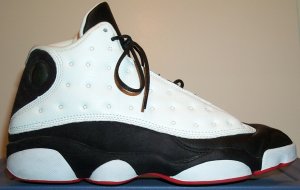 Basketball player and Nike endorser. His shoe models occupy a significant dollar value of the market. His shoe models also are the target of the great majority of reported sneakerjacking incidents.
JUMPS
Slang for cheap generic sneakers, in the area around Paterson, NJ: short for "Just Understand Mama's Poor"
JUMPMAN
The logo seen on Air Jordan athletic shoes since the third Air Jordan style came out, inspired by the jumping profile of Michael Jordan.
Just Do It
An exhortation frequently mentioned in Nike advertising. As in the sense, "Don't care what others think, YOU Just Do It." Puma has a very similar slogan, "Macht's mit Qualität" in German ("Do It With Quality" in English).