Stan (Stanley Roger) Smith was an American tennis pro of the early 1960's. He was at the peak of his career as Australian Rod Laver was starting to fade away. 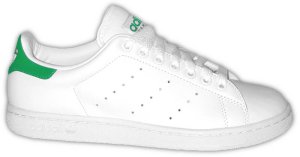 Both of these tennis professionals had adidas shoes named after them. The Stan Smith, probably because of its clean, understated design, has remained a consistent seller for decades. 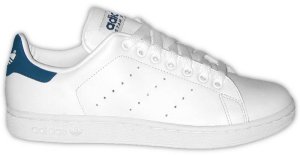 Usually, adidas shoes have external stripes attached to the shoe. The Stan Smith has no external stripes. Instead, the adidas stripes of the Stan Smith are rows of perforations through the leather upper. Some versions of the Nike Cortez (and some other Nike styles) used the same technique to outline the SWOOSH.

Another interesting shoe is the Stan Smith in suede. No external stripes, no perforations, and a Trefoil on the side. 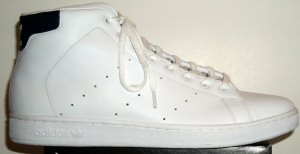 adidas has also come out with a Stan Smith high-top version in limited quantities. (There is also an all-black version of this shoe.)

There are a number of color combinations for the Stan Smith:

Fifteen years after Stan Smith was at his prime...

Nike "bad boy" John McEnroe was beginning his stormy tennis career. One time, John was nursing the lingering effects of an ankle sprain and appeared on court (and on TV) in a pair of gray Nike high-top racquetball shoes. Up to that appearance, Nike had sold only 5000 pairs of them; a year later, thanks to John McEnroe, Nike had sold a million pairs of the same shoe.

In 1998, adidas created an update of the classic Stan Smith tennis sneaker for today's more aggressive style of play. The "Stan Smith Millenium" has a updated outsole and upper, while maintaining many of the same design features. For example, the design kept the original rows of perforations.

In 1998, adidas also created a "Millennium" updated version of the classic Superstar and Promodel basketball shoes.