Sometimes, I wonder if there are some unusual uses for sneakers. A few shoe-related searches turned up the following gems:

In New York City jails, the Department of Correction forbids prisoners to wear Nike Air or similar sneakers. Why? Enterprising prisoners have hollowed out the sole and used the Air chamber for the storage of contraband, including razor blades and significant quantities of drugs. Incoming prisoners wearing forbidden sneakers have their sneakers taken away during their incarceration. They get the sneakers back after serving their time in the slammer. (During their time in jail, the city issues them inexpensive slip-on canvas sneakers.) Ironically, prisoners can keep wearing their old Converse "Weapon" sneakers as they can't be used as a weapons cache. The Department of Correction includes, as part of their prison history exhibit, a pair of altered sneakers.

The logo for a new pharmacy chain? 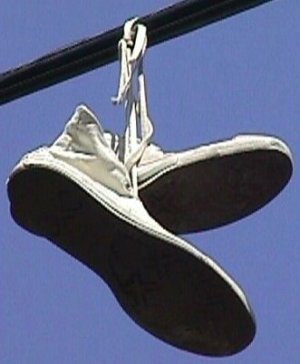 In some Texas cities, old Converse "Chuck Taylor" All Star sneakers are thrown over utility lines to indicate the presence of drug dealers in the area.

Did Mary and her Little Lamb both have Keds?

When I first heard of "Sheep Keds," I wondered what the sheep were wearing. However, "Sheep Keds" are a sheep parasite, as described by the Alberta, Canada Department of Agriculture, Food, and Rural Development:

"Sheep Keds (Melophagus Ovinus) are wingless blood-sucking flies that spend their entire lives on sheep. Although Keds can survive for two to eight days off their host, transmission from sheep to sheep normally occurs by direct contact among crowded animals.

Female Keds give birth to larvae which they glue to the wool of sheep. The attached larva immediately forms a pupa, and continues its development for another three to five weeks. When it emerges from the pupa it will be an adult. Keds live in the wool for four to five months, and are most numerous during the autumn and winter months.

Large numbers of feeding Keds irritate the sheep, and may produce anemia in heavily infested animals. The irritation to the skin causes the sheep to rub and scratch itself, which damages the wool. Lambs and poorly fed animals are most liable to suffer from Keds."

Replacement for the "BOARD OF EDUCATION?"

This was recommended by an user posting anonymously on a certain "alt" newsgroup: "Has anyone ever tried using a Teva sandal as a spanking paddle? I tried it last night. They are more stingy that ANY paddle I have EVER tried, wood, leather or anything. You've got to get the really flexible ones. I couldn't believe how effective they were..."

On further research, it turns out that this practice is a traditional British technique for dealing with naughty children, frequently known as "slippering." It is even mentioned in Herman Melville's classic novel "Moby‑Dick."

I'll be keeping my eyes open for more unusual uses for sneakers!