Charlie's Sneaker FAQ and Glossary - U

Unusually sized footwear
The National Odd Shoe Exchange is a non-profit organization that deals with problems with odd feet (either ones that are differently sized or the case where someone has only one foot). The National Shoe Retailers' Association, on the other hand, has a referral service for dealers in your area that carry unusually sized shoes. Please send a stamped, self-addressed envelope to:

ATTN: Consumer Requests
National Shoe Retailers' Association
7386 North La Cholla Boulevard
Tucson, AZ 85741-2305
United States
Large nation with many sneaker fanatics. Conveniently fills the hole in the globe that would otherwise exist between Canada and Mexico. Once known as the "United Colonies" but they split away from the United Kingdom about 140 years before Marquis Converse invented the basketball boot.
United States [sneakers made here]
To summarize the point, there aren't many. Maybe President Donald Trump can change things. See "International Manufacturing" for more information.
Upper
The externally visible top portion of a sneaker, and the inside lining, located above the sole. See the color-coded sneaker for an illustration.
Upper (height of)
Modern athletic shoe design has a continuum of upper heights, including low-top, mid-top, ¾ high, ⅝ high, high-top (and beyond). It's known that athletes have fewer ankle problems with mid-top and high-top shoes. Research into why this is the case indicates that it's not the shoe keeping the foot out of harms' way (despite the requirement for wrestling shoes that they provide "firm support for the ankles"). Instead, the protective effect is from the sensation of the upper giving the wearer an indication that the foot is out of alignment. In the early 1990's, Nike came out with a number of designs that exploited this effect, among them the Air Huarache series and the Air Carnivore. However, many models nowadays trim back the back portion of the upper.
Uptempo 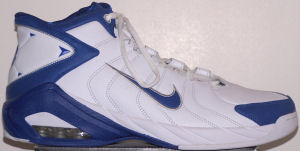 A line of Nike basketball shoes designed for speedy players. Kobe Bryant is probably the best-known player to wear shoes from the Uptempo line (one of the recent Air Huarache styles). Also see Flight and Force for other Nike basketball shoe lines.
Uptowns
In (originally) Harlem and (later) Queens, New York City, United States: Nike Air Force One sneakers.
US Design Patent 298981
Describes the pocket in KangaROOS sneakers.
US Patent 3629962

A Converse athletic shoe outsole intended to combine good lateral traction yet not collect debris. (Apparently, the shoe that used this outsole was not only endorsed by baseball player Lou Brock but it featured an outsole designed and patented by Lou Brock.)
US Patent 3793750
Describes an athletic shoe for artificial turf, invented by Bill Bowerman, Nike co-founder. The patent pictures show the famous waffle outsole in detail.
US Patent 4098011
Describes cleats for artificial turf, invented by a group of three at BRS including Bill Bowerman, Nike co-founder. It describes a refinement of the waffle outsole.
US Patent 4183156
This patent, by Marion Frank Rudy, describes possible insole construction details used with numerous Nike AIR styles.
US Patent 4219945
An invention by Marion Frank Rudy. Known to runners everywhere as that ultra-comfy Nike AIR.
US Patent 4255877
A design for an external counter that wraps around the heel, designed by Bill Bowerman, Nike co-founder.
US Patent 4271606
Another improvement in athletic shoes by the prolific inventor Marion Frank Rudy. A refinement of Nike AIR which involved arranging the outsole projections under the AIR chambers.
US Patent 4287675
A New Balance design for heel counters.
US Patent 4288929
A New Balance design for a stabilizing plastic cup that partially surrounds the heel.
US Patent 4297796
The Dellinger Web shock-dispersing device. Invented by William ("Bill") Dellinger and Ronald Stirtz.
US Patent 4297797
It looks to me like the same basic idea as Nike AIR except using a fluid.
US Patent 4327503
A Nike design for a bi-level outsole, originally designed for cleats but also seen in basketball shoes.
US Patent 4335530
Describes an athletic shoe outsole with multiple sole densities.
US Patent 4340626
A molecular trick that makes Nike AIR finish its inflation after they seal it. The combination of the inert gas molecules and the chamber materials make atmospheric air diffuse into the chamber. Yet another Marion Frank Rudy creation.
US Patent 4354318
A Nike design that incorporates a sidewall bead to increase stability.
US Patent 4364188
An insole design that features tubes of material that are stiffer than the remainder of the insole. Also discusses the possibility of user-adjustable tubes.
US Patent 4364189
The classic dual-density midsole: A stiffer medial layer, and a less firm lateral layer. (The patent includes comparisons to other shoes of the day, made by adidas, Nike, and Osaga [a long gone shoe brand].)
US Patent 4372058

Describes the AVIA Cantilever athletic shoe outsole.
US Patent 4445283
A technology similar to Nike AIR except the chambers were shaped differently.
US Patent 4584782
The first sport sandal patent by Mark Thatcher, inventor of the Teva. Mark's first design covered the design of a heel strap that could be folded forward (resulting in a "flip-flop") or wrapped around the ankle (to keep the sport sandal from flying off).
US Patent 4793075
Another invention related to sport sandals, developed by Mark Thatcher. This patent covers the Teva "Universal" strapping system.
US Patent 4817304
Why Nike changed the design of Nike AIR athletic shoes so one could see the air chambers. It was not merely a decorative touch but it improves the function of the shoe.
US Patent 4817307
A patent titled "Bumper mounting assembly for a snowplow." For some reason I (Charlie) do not know, people search for the number and end up on this Website. The only place I can find it is in the log of search strings that brought people to this site. Go figure!
US Patent 4906502
A plastic-fabric composite sandwich structure inflated with Nike AIR inert gas. Appears to be the Zoom AIR design. According to inventor Marion Frank Rudy, this results in a more stable athletic shoe than the earlier designs.
US Patent 4936029
An enhancement of the Nike AIR design that mixes crystalline material into the AIR capsule. According to inventor Marion Frank Rudy, this provides more stable pressurization throughout the life of the product.
US Patent 4944310
The "Device For Treating Snoring Sickness," known to many satisfied (and frustrated) patients as CPAP.
US Patent 4989350
A Converse design for a high-top basketball shoe that featured plastic struts to prevent unwanted side-to-side motion.
US Patent 5042176
An enhancement of the Nike AIR design described in US Patent 4936029. According to inventor Marion Frank Rudy, this allows creating an AIR capsule that can be inflated with nitrogen.
US Patent 5083361
Marion Frank Rudy makes additional improvements to the basic design described in US Patent 4906502.
US Patent 5113599
Known to sneaker freaks everywhere as The Reebok PUMP.
US Patent 5152082
A proposed high-top internal support structure that looked akin to a plastic picket fence.
US Patent 5247742
A motion control device developed by Nike that embeds a plastic serrated structure in the midsole.
US Patent 5343639
A design for a user-tunable version of Nike Shox ("Son of Pump," anyone?) Also see US Patent 5353523.
US Patent 5353459 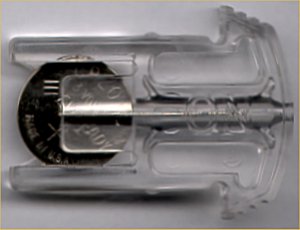 The design of the LA Gear light GEAR cartridge.
US Patent 5713141
A method of combining polyurethane and EVA copolymer that results in a  multilayer Nike AIR capsule with superior gas retention capabilities.
US Patent 5896683
A  Nike design incorporating plastic outriggers molded to the upper. This design appears similar to the so-called "monkey paw" on some Nike styles.
US Patent 5952065
Refinements to US Patent 5713141.
US Patent 6013340
Describes the methods of making a polyester polyol-urethane mixture used in the walls of certain Nike AIR capsules.
US Patent 6406038
Covers the design characteristics of the wheel assembly in the "Heelys" brand of shoe.
US Patent 6487796
A further improvement to the Nike Shox technology that shapes the columns to obtain enhanced lateral stability.
US Patent 6630507
The patent for medical marijuana, held by the United States Government.
US Patent Office
As indicated by the many sneaker patents they have issued...  a United States government office that keeps very busy!