My biggest question about this particular shoe is: "Was Converse overly obsessed with adidas products when they designed this shoe?" It has the three stripes usually associated with that brand. Converse also made a track training shoe with the familiar three-stripe design. Unfortunately, adidas did not trademark their stripe pattern. Shoe companies could and did copy the three-stripe pattern. However, adidas did trademark their Trefoil logo, so none of the copies ever had the "pot leaf" on them. 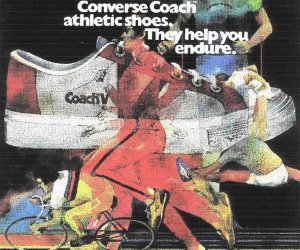 Converse also used the "COACH" name on several other sneaker models, including a close clone of their famous "Chuck Taylor" All Star canvas basketball shoe. This vintage advertising material shows some other "COACH" models, including nylon and suede running shoes.

Converse wasn't the only one engaged in adidas cloning back then... 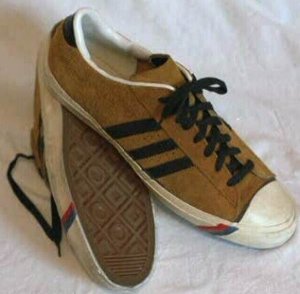 After looking at this shoe, I again wonder, this time more strongly: "At that time, was the entire remainder of the athletic shoe business overly obsessed with adidas products in the early 1970's?" It has the three stripes usually associated with that brand. However, it kept the PRO-Keds design unique features of the red and blue stripes by the toe and the circle and square sole pattern.

There was also a two-stripe suede version of PRO-Keds made in the 1970s and since periodically reissued.