My former male teammates and their sneakers

Probably the favorite in my former team:

Bill found that he needed a less cushy running shoe than a pair of Nike Air Max. He got a pair of ASICS GEL Kayano shoes to keep things stiff and stable.

Bill found that running was too hard on him and he had to have some foot surgery. For a while, he was down to wearing a pair of Nike Air Deschütz sport sandals around work!

[His sneakers were one of the few things older than the Space Station computers!]

He's had these Nike All Court sneakers for a good long while.

Gary told me a story about these Nike All Court sneakers. It seems they were literally bought for use as "sandshoes." He won an employee contest when he was working on the Space Shuttle in 1982. His prize was a trip to Hawaii.

[Chucks and Configurations are his specialties.]

Before he went to management, Gary was our "Engineering Configuration Management" person. That means he got to keep track of all our software pieces. He had several sneakers in his collection, including some Converse "Chuck Taylor" All-Star sneakers in black and white. (Gary professed no love whatsoever for high-top sneakers.)

[Wrote the C code that glued all the various things together here on the Earth.] 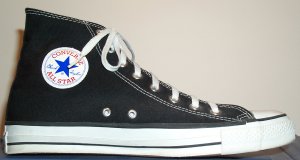 Jack played high school basketball back in the days when Chucks reigned supreme. Over the years he's been on Space Station he has had several pairs of sneakers he wears into work, including pairs of black Converse "Chuck Taylor" All-Star low-top and high-top sneakers, a pair of beat-up white and Carolina blue adidas Superstar, a pair of Nike, and a pair of ASICS. Jack, like Charlie, is now retired.

Jim is from Oregon, the home of the Umpqua and the Deschutes (two rivers that Nike used for naming their sport sandals). So, it would be appropriate that Jim is a Nike fanatic, and he is.

Jim is not only a Mac addict, but also a Pepsi fanatic. (Being much less of a Yankee than Jim is, I prefer a Coke any day.) Jim is so much of a Pepsi fanatic that (with some help from throwing some pool parties) that he got a pair of "Pepsi Stuff" Teva sport sandals!

I should point out some things about Young Stevie:

Young Stevie has a pair of  New Balance 999 running shoes. They have been everywhere from SA (Southern Alabama) to the SA (Swiss Alps). He told me they've also been to England and Mexico.