Charlie's Sneaker FAQ and Glossary - I

"If you have a body, you are an athlete."
The definition of Nike as to what is an athlete; part of their mission statement. Said by Nike co-founder Bill Bowerman. Charlie, therefore, is an athlete. Even though when he tried to learn to play basketball he was utterly incapable of dribbling the ball and moving at the same time. Fortunately, that is not a skill you have to have to be a software weenie. Charlie would be closest to being the next Mark Spitz except for the fact they don't make a Speedo big enough.
Incubus
In medieval mythology, an evil spirit that violates women while they sleep. Unfortunately, Reebok used this name for a running shoe in 1997. Later, they recalled them. The name "Incubus" was only on the box, so they were able to re-issue the shoe with another name. I (Charlie) never heard what the other name was.
IMPAX 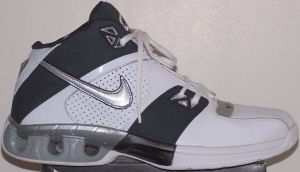 An athletic shoe cushioning technology introduced by Nike. They look like Nike took the plastic "dough" left over from punching out Shox columns and turned it on its side.
Inert gas
At least four manufacturers use an inert gas of some type in their cushioning systems:

Insole
The portion of the shoe sole upon which the foot or sock rests while in use. Also known as the sockliner. See the color-coded sneaker for an illustration.
International Manufacturing
GENERAL RULE: To exclude a certain undesired country from your sneaker purchases, one will need to search on a "box by box" basis. The major manufacturers all source from a number of countries. There are some rules from the United States Federal Trade Commission that define terms used to describe products partly or totally made in the United States:

Certain athletic shoe manufacturers (including ASICS and Nike) have recently taken to a bizarre labeling practice. They label the country of origin for the cardboard box (the United States) and separately label the origin of the shoes inside!

International Size Cross-Reference
Look here for the international size cross-reference tables for infants, children, women, and men.
Internet
An advanced technology that allows one to visit the Web sites of athletic shoe companies and generally waste time even more effectively than television. Most access to the Internet goes through a modem of one type or another. Look here for Web browser information.
iPad
A virtual fidget spinner for software weenies that Apple sells for $779.00 (manufacturers' suggested retail price). Like many fidget spinners, an iPad will keep software weenies occupied and happy until the battery runs down. Unlike most fidget spinners, you can access the Internet from anywhere you can get a cellular data signal (if you buy the model that Charlie has). If you want to use an iPad as a real fidget spinner, there's an app for that!
iPhone
A marvelous device that fits in your pocket. But it will be out of your pocket most of the time because it has at least 1001 uses. It can even be used to place and receive telephone calls! Apple sells the base model for $399.00 (manufacturers' suggested retail price). If you want to use it as a fidget spinner, there's an app for that!
IV
A medical procedure used to treat the sickest and the healthiest. As to the healthiest: Even the healthiest runners can end out getting an IV if they try to run until they drop! Sometimes called a "drip" but that's not necessarily the case if they're treating a severely dehydrated individual. (Been there, done that.) Blood tests and blood product donation are IVs going the other way (or, in the case of automated procedures like plateletpheresis, both ways). A PICC is how they do an IV when you are seriously ill, otherwise they just stick a needle in your arm or the back of your hand. I usually talk a phlebotomist through starting an IV; most people that are human pincushions do. I told a grandmotherly one "Both sides work. The veins on the left side are closer to the surface but they have more scar tissue." The phlebotomist, after feeling around, told me "Honey... you've got plenty of scar tissue on both sides!"