Converse keeps going and going in the casual sneaker market with the "Chuck Taylor" All Star, originally designed (and up to middle 1980's) worn as a technical basketball shoe. 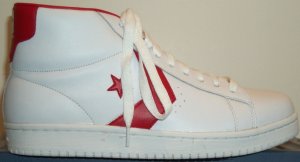 Improved sneaker technology may have relegated the "Chuck Taylor" All Star to casual fashion, but Converse tried to maintain a competitive presence in the technical basketball shoe market, from the 1970 leather One Star to the 1996 All Star 2000 and the 1999 Converse Helium. 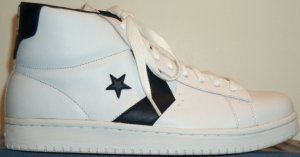 In the late 1970s and early 1980s, the Converse "Dr. J" was very popular for basketball players. Michael Jordan wore them in college with Carolina blue trim when he was playing for the University of North Carolina. The "Dr. J", named after basketball star Julius Erving, was produced in low-top and high-top styles, as well as smooth leather and suede. 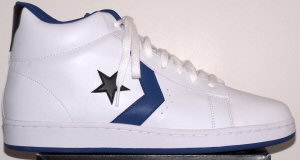 This particular variant has a scooped-out design at the top of the upper; it also has a blue chevron and a black star, where the shoe above it has only blue trim. 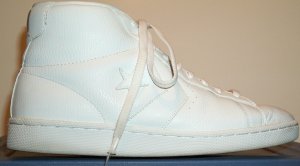 I remember wanting to buy a pair in late April 1985, for my birthday... and I had to hunt for them. It wasn't basketball season, and most stores had sold out. Nowadays, it seems, athletic shoe stores always keep basketball shoes in stock! 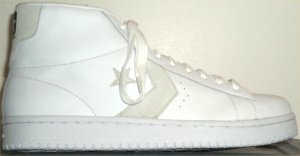 Converse recognizes the continued popularity of this design, as they made them again in the 1990's, 2001, 2003, and intermittently up to and including 2017. However, they placed the shoe in their "athletic originals" (what I'd call "knock-about, fun sneakers") product line. Converse also had a spring 1997 "Dr. J. 2000" technical shoe. 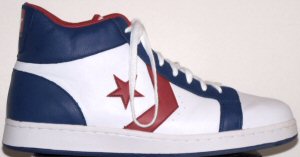 This particular colorway is patriotic red, white, and blue. 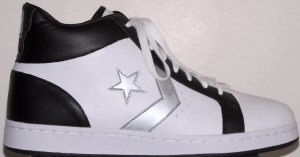 Another recent colorway is white, black, and silver.

What's Julius Erving up to now?

Julius Erving (Dr. J himself) was active in the business world, including Executive Vice President of the NBA's Orlando Magic. He has previously served on the Board of Directors of Converse (prior to their 2001 bankruptcy), Darden Restaurants (best known for LongHorn Steakhouse and Olive Garden), Saks Incorporated, and The Sports Authority.