F-Word, The
In the portion of the athletic shoe industry that takes its products seriously, particularly at Nike: "fashion."
Failure, Miserable
Michael Moore's Fahrenheit 9/11 was a miserable failure if he thought it was going to throw the 2004 election!
FAQ
Normally, "frequently asked questions." On here, if I (Charlie) hear the same question more than once or twice, it usually ends out here.
Feet, Differently Sized
The National Odd Shoe Exchange is a non-profit organization that arranges for unique footwear problems, like one foot that is a different size than the other.
Felony Flyers
A term in New York or New Jersey for Chucks or CONS.
Felony Shoes (Fast definition)
A term for sneakers. Called so because sneakers increase ones ability to get away from a crime scene before the police arrive. Many types are well-suited for criminal activity, including (but not limited to) sneakerjacking. However, in one case, the police were able to nab a hapless suspect in LA Gear. His sneakers flashed every time he moved, so the police were able to track him with ease across an open field in the dark.
Felony Shoes (Slow definition)
An alternative definition for felony shoes comes from jail practice. If the prisoner is deemed a risk of suicide, standard practice is to take their shoe strings to prevent them from making a crude (but effective) noose. Therefore, shoes without strings are sometimes called "felony shoes."
Felony Shoes (Recursive definition)
Cons in CONS.
Fidget Spinner
An inexpensive but trendy toy, sold almost everywhere during Summer 2017, that young teenagers can sit and poke for hours. When they get enough money to buy an iPad, they will do the same thing with the iPad.
Fila 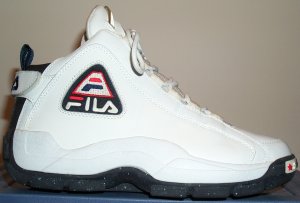 The Italian founding family of a knitwear company that branched out into athletic shoes.
Fireman, Paul
Former chairman of Reebok International Limited, a United States based company with a name that sounds like it belongs in the United Kingdom.
First Law of Sneaker Obsolescence
See "Laws of Sneaker Obsolescence (First)".
First Sneakers
The first sneakers (then called "sandshoes") were made in the 1830's by Dunlop Rubber of the United Kingdom. 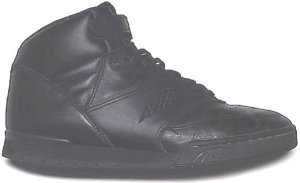 A term used by those who would market aerobic shoes to Real Men. Real Men think they wouldn't be caught dead doing aerobics. On the other hand, Real Men would probably either pass out from exhaustion or sprain an ankle if they tried... after all, women are not necessarily wimps!
Flight 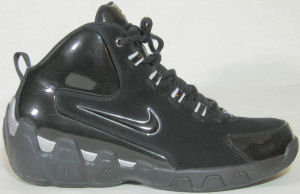 A term used by Nike for their lighter basketball shoes that are intended for speedier players. If it was not for the Air Jordan product line, Michael Jordan would have been the prototypical player for the Flight product line. Also see "Force" and "Uptempo" for other Nike basketball shoe lines.
Flip-Flop

(a) For a hardware weenie or software weenie: a bistable multivibrator (a fancy name for one bit of memory, the smallest possible quantity of storage). (b) Footwear with a slab sole and a thong upper... about the minimum you can get away with. I (Charlie) think flip-flops do too much flipping and flopping. Charlie does a pair of Teva sport sandals as his go-to footwear when he doesn't want to wear sneakers.
Football 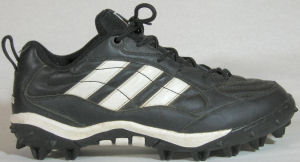 Depends where you are located. In the United States, a game played with a pointy ball, lots of padding, and a lot of the players in high-tops. In the United Kingdom and many other countries, a game played with a round ball, no padding, and no high-tops. In the United States, the game with the round ball is called "soccer."
Folding
Folding@Home is a distributed computing program at Stanford University. Charlie thinks it's a worthwhile project to support with your spare CPU cycles.
Fonts
I (Charlie) have always had a love of decorative calligraphy and such. I used appropriate typography in this Web site for various brands of sneakers. This Website uses Web Open Font Format (WOFF) font embedding technology; supported in recent versions of the most popular Web browsers. If you do not have a Web browser that supports WOFF, to see the Web site the way I see this Web site, you need the following fonts:
But never fear: If you don't have a Web browser that supports WOFF technology, and you don't have these fonts, your Web browser will select a font from the ones you do have with similar characteristics.
Football Boots
In the United Kingdom, a term used to refer to soccer sneakers.
Footbag Shoes 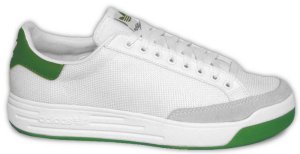 For a large number of footbag players, the ideal shoe is the adidas Rod Laver tennis shoe. However, a minority prefer the free and open feeling of a Teva sport sandal.
Force 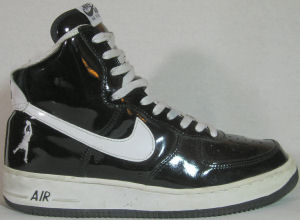 A term used by Nike for their heavier and tougher basketball shoes that are intended for heavy, aggressive basketball players. Charles Barkley is a prime example of a prototypical player for the Force line. Also see "Flight" and "Uptempo" for other Nike basketball shoe lines.
Formstrip
The stripe down the side of a Puma athletic shoe.
Foxing 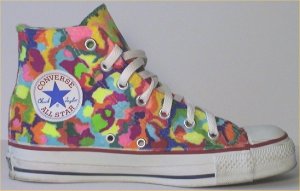 The rubber sidewall around the bottom of many canvas sneakers. In this example, the foxing has red and blue stripes. During the typical canvas sneaker manufacturing process (known as vulcanization), heat and pressure applied to the foxing bonds the sole to the upper.
Foxing, Blowout 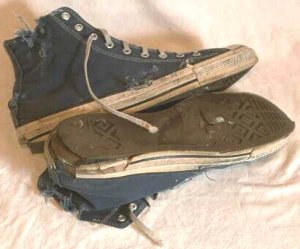 When a pair of Chucks have their foxing blow out, they're shot!
Frames
Something you'll find on Internet Web sites that are long on style and short on content. I (Charlie) prefer to waste bandwidth on useful things like hyperlinks to cute sneakers, graphics, and even text in decorative fonts.
Frazier, Walt

Basketball player and Puma endorser of the 1970's. Nicknamed "Clyde." Prospective Puma purchasers got to view Walt's infectious grin on the label end of the box. 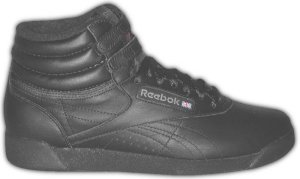 The original aerobic shoe for women from the mid-1980's. A multi-million seller for Reebok (demand for them never seems to go away...).
"From a tradition of over 100 years, these athletic shoes meet the demand for quality & performance required by today's athlete"
A slogan used for, and sometimes printed on, Reebok athletic shoes.
Fun
The words "cute" and "fun" are quite likely the two most overused in the English language. After all, most anything done wearing athletic shoes can be fun (even a track meet can be fun for runners) until one ends up having to use an ACE Bandage... or even an IV. Fun sneakers include Chucks, the Cortez, the Freestyle, the Jim Shoe, and many Vans.