An abbreviation in more than one model name of Nike basketball sneakers named after Cynthia Cooper. ("C" for Cynthia, "14" for her jersey number.)
California
California Last
An alternate name for the slip last.
Carolina Blue 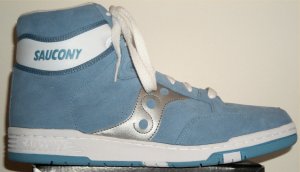 Sometimes, this color is called "light blue" and associated with tiny little baby boys. On the other hand, White and Carolina Blue are the traditional colors of the University of North Carolina "Tarheels." Michael Jordan would likely scowl at you (or worse) if you accused him of wearing "baby boy" colors when he played basketball in college.
Cantilever

A patented (US Patent 4372058) design feature of AVIA athletic shoes, featuring a concave heel. This design is intended to stabilize the heel and lessen landing forces.
Canvas 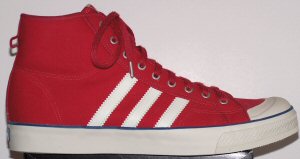 A term frequently used for a cotton or linen cloth that is used to make sneakers with fabric uppers. This fabric probably should be called "canvas duck" or "duck" as it is lighter than the heavy canvas used for tents and tarpaulins. Typical canvas sneaker construction techniques consist of applying foxing along the shoe bottom, followed by vulcanization.
Canvas Duck
A light-weight fabric, similar in appearance to canvas but lighter, used for sneaker manufacture.
Canvas sneakers, whitening
Look here for some techniques used for whitening canvas sneakers.
Cat Heads
In the 1970s in New York: Cheap wannabe Chucks.

On the other hand... I (Charlie) associate that tune with the following questionable ditty about a famous household cleaner:
"Comet, it makes your teeth turn green.
Comet, it's made from gasoline.
Comet, will make you vomit.
So eat some Comet and vomit today!"
Cell

A cushioning design used by Puma in their athletic shoes. As far as I am concerned, these shoes had little shock absorptive capacity.
Charlie 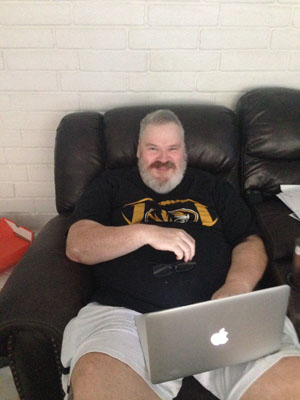 The Webmaster of this fine Web site. Before you ask, I (Charlie) have never worked in the athletic shoe industry. I retired from Boeing in 2010.
Chastain, Brandi 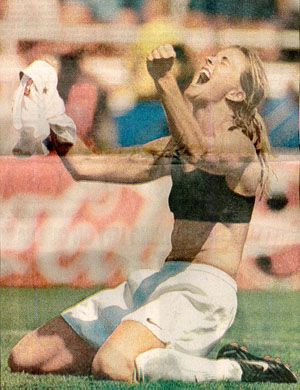 Soccer player for the United States team. She gained her fifteen minutes of fame by whipping off her jersey in the excitement of winning a match and showing off what was underneath... it was a black Nike sports bra, just like many women use when they work out.
Cheaper Jeepers
A derogatory reference to the clone (namely, less-than-Chuck) status of Sears Jeepers brand sneakers, used by some Baby Boomer boys.
Cheerleaders (Baby Boomer)
As I (Charlie) remember the old school days before Title IX: the only event in which young women Baby Boomers got to display their athletic skills. Cheerleaders were usually very cute and athletic. Cheerleader outfits include sweaters, short short skirts, and cheerleading shoes. During the Baby Boomer days, the young women in their Keds cheered on the young men playing basketball in their Chucks. Others have said that the two most important attributes for a cheerleader are an attitude and a nose job.
Cheerleaders (Internet)
On the Internet, cheerleaders are frequently the centerpiece of risqué stories involving making whoopee with football or basketball players. Internet cheerleaders are always getting caught in various acts of moral turpitude, for which Mother displays where her child got their athletic ability by hosting a follow-up athletic event, like a slippering.
Cheerleaders (Presently)
During an athletic event, they have exactly the same function as they did in the Baby Boomer days. Except, now, some schools also have young men as cheerleaders.
Cheerleading Shoes
Chuck Clone
A sneaker that looks like a pair of Chucks but aren't... always an inferior imitation. Usually a store brand.
Chuck Conners
Another nickname for Chucks, particularly in Texas. I (Charlie) have lived in Texas since 1992, and I've never heard anyone use the term. But I've had other readers of Charlie's Sneaker Pages tell me that!
Chuck T's
Another nickname for Chucks, particularly in New Jersey.
Chuckies
Another nickname for Chucks, particularly in New Jersey.
Chuckie T's
Another nickname for Chucks, particularly in New Jersey.
Chucks 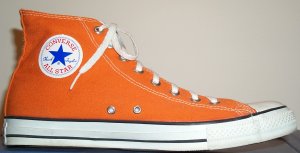 Probably the most prevalent high-top ankle patch design. A circular logo on the ankle of Converse "Chuck Taylor" All Star sneakers, featuring the All Star brand name, the Converse Star and the signature of the one and only Chuck Taylor. Of course, Chuck Clones feature an imitation Chuck Patch. Reputedly has a protective function.
Chucks (pink)
See "Pink Chucks."
Chucks (rumors of discontinuation are highly exaggerated)
People hear reports that the classic Converse "Chuck Taylor" All Star sneakers have been discontinued. Here are the facts of the matter:

Chugach
A United States National Forest near the Alaskan city of Tatitlek, at the mouth of the Straits of Valdez; probably the naming inspiration for the Nike Air Chugach hiking boot.
Cleaning Sneakers
There are a number of things to be considered when cleaning dirty sneakers. Most manufacturers recommend the following:

After cleaning the sneakers, be careful when drying them. 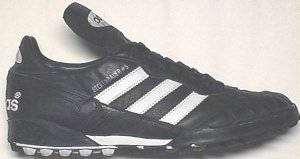 A type of athletic shoe used for playing sports like baseball, football, or soccer. Cleats have some type of projections, either metal or rubber, on the outsole. Cleats are subject to sales tax during the Texas Sales Tax Holiday. Also known as studs in the United Kingdom.
Clone
A pair of sneakers that look like a famous sneaker... but they aren't. Also see: Bobos, Cheaper Jeepers, Chuck Clones, Fishheads.
Clyde
A nickname for 1970's basketball player Walt Frazier, who played hoops cool and easy in his Puma suede sneakers. Prospective Puma purchasers got to view Walt's infectious grin on the label end of the box. These sneakers are known as "Puma States" in Australia.
Cross-Country
A long-distance track meet, usually held in the fall, where each team fields an equal number of runners (most typically seven). It is held over open terrain (up and down hills, if any are available). When scoring a cross-country meet, the first runner to finish gets one point, the second gets two, and so on. The team with the lowest score is the winner!
COACH
Cobain, Kurt
A grunge rock "musician" and member of the group Nirvana who died wearing black Converse One Star sneakers.
Color-Coded Sneaker
The sneaker pictured below has the visible components color-coded:

The vamp (this sneaker is a CVO) is red.
The remainder of the upper (the vamp is part of the upper) is green.
The inside of the upper is yellow.
The insole (sometimes called the sockliner) is blue.
The foxing is black.
Colorway
The specific color combination used on an athletic shoe. Many sneakers come in multiple colorways.
Combination Last
An athletic shoe construction technique that combines the features and benefits of both a board last and a slip last. Combination lasted shoes have a stiffening board only in the heel area.
Compression-Molded EVA
A midsole made out of EVA that is injected into the shoe mold. Generally more durable than sheet-formed EVA. Nike refers to compression-molded EVA with the trade name "Phylon."
CONS
A name for some Converse sneaker models. Possibly, but not necessarily, felony shoes. Makes Converse a four-letter word, particularly at Nike and Puma. Saves on typesetting costs at Converse headquarters in Massachusetts.

Constant Positive Airway Pressure
The most frequently used therapy for Obstructive Sleep Apnea; abbreviated "CPAP." Invented by Dr. Colin Sullivan of the University of Sydney in Australia. CPAP uses a tiny blower to maintain a low positive pressure (typically 4 to 20 grams per square centimeter above ambient, selected depending on patient response in a sleep lab) in the nose and throat during sleep. Dr. Sullivan received US Patent 4944310 and would receive the Nobel Prize if most Obstructive Sleep Apnea sufferers had anything to say about it. If the patient can adjust to the sensations of CPAP (it's a bit like the sensations going up in an airplane; about 70% adjust to it long-term), the lifting of fatigue and other problems can be dramatic. My personal experience: I (Charlie) knew it was going to work the night they first tried me on CPAP in the sleep lab. It took a few days to find out how well!
Converse
An athletic shoe company founded in 1908, best known as makers of Chucks. Their logo is the Star. The company is named after the founder, Marquis M. Converse. Converse has had numerous owners over the years. They went into bankruptcy in 2001, but they reorganized and became a division of Nike in 2003.
Converse One
The same basic idea as NIKEiD but with Chucks in your choice of either low-top (if you really insist on having pseudo-Chucks) or the world standard high-top. Given the notorious reports about words that NIKEiD won't accept, I (Charlie) spent some fun time putting the Converse One naughty-word checker through its paces. Interestingly enough, Converse One won't let you personalize your Chucks with several Converse-related names:
And for those who remember vintage sneakers... it will take JEEPERS... but it won't take SKIPS!
Cooper, Cynthia
As to basketball ability: the female doppelgänger of Michael Jordan. She played for the WNBA Houston Comets in the 1997-2000 seasons. She served as head coach of the Phoenix Mercury during the 2001-2002 season... but she couldn't resist playing again. So, she signed again with the Comets in 2003 and played another year.
Cortez

An early design by Nike co-founder Bill Bowerman. Originally designed for training runners. Now, strictly for fun.
Court Shoes
A generic term like "tennis shoes" for sneakers that could be worn on the basketball court, tennis court, volleyball court, etc. Of course, Baby Boomers wore Chucks on all of them when they were teenagers.
CPAP 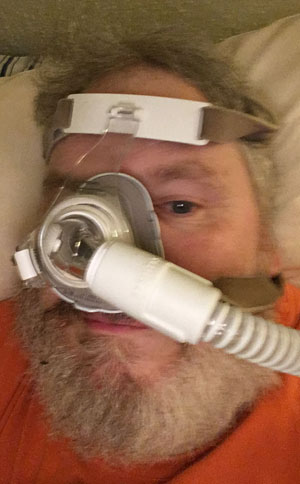 Acronym for "Constant Positive Airway Pressure." See that entry for more details; this is a picture of the CPAP mask that I (Charlie) use at night, a Philips Respironics True Blue nasal mask. I've been using CPAP since 1998, so I'm an old hand at it.
Cross-Trainer (in the 1960's and 1970's)
The Converse "Chuck Taylor" All Star. Baby Boomers remember fondly; teenagers are bemused.
Cross-Trainer (in the 1980's and beyond)
An athletic shoe carefully optimized by its manufacturer to be useful for no athletic activity whatsoever. Usual optimizations guarantee the cross-trainer is too heavy for a fast track performance, while providing insufficient support for basketball.
CTAS
A Converse abbreviation for "Chuck Taylor" All Star. Frequently seen on recent boxes of Chucks.
Cushioning Shoes
The subset of running shoes that have cushioning as a prime feature. However, running in overly cushioned shoes can result in a condition informally called "Nike Knee."
Cute
The words "cute" and "fun" are quite likely the two most overused in the English language. Cute sneakers include the Freestyle and the Nylite.
CVO
Acronym for "Circular Vamp Oxford." (Some sources have said the "C" is Canvas, but shoe manufacturers make CVO models from leather or other non-canvas materials.) An oxford where the vamp portion forms a roughly circular shape. Usually a boat shoe construction detail. Shown on the color-coded sneaker example.