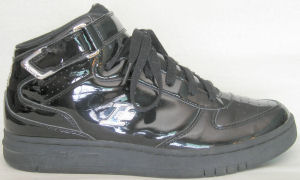 A term used by Reebok for their cutting-edge styles; roughly equivalent to Alpha Project products from Nike.
REACT
A trade name for a proprietary athletic shoe performance improvement technology used by Converse.
Red Ball Jets
A canvas sneaker sometimes remembered fondly by Baby Boomers. Red Ball Jets sneakers were made from 1951 to 1971. Red Ball rubber boots and waders were on the market as of 1998, but they are no longer available as of 2005. 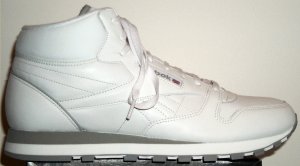 A brand name for athletic shoes sold by Reebok International Limited. Named for the southern African antelope (Pelea capreolus). Known for displaying the flag of the United Kingdom on many of their sneaker models.
Reebok International Limited
Designer and marketer of athletic shoes and equipment sold under a number of brand names, including their flagship Reebok. Reebok International Limited started in the United Kingdom. They were later bought out by their United States importer, headed by Paul Fireman. Later on, they were acquired by adidas.
Reebox
An athletic shoe brand for jocks who get tired of wearing addidas.
Registered Identification Number
See "RN."
Reissue
A subsequent manufacturing run of a vintage sneaker. Compare to New Old Stock.
Resistor Color Code
A method used to encode electronic parts in television sets. Also used by organized software weenies to arrange their clothing and sneakers in order for quick access. I (Charlie) indeed use this method, much to the surprise of a former co-worker. The resistor color code colors, in order, are "black, brown, red, orange, yellow, green, blue, violet, grey, white." The words can easily be remembered by the mnemonic "Bad Boys Rape Our Young Girls But Violet Gives Willingly!" Also see "ROY G. BIV."
Resoling
For information about re-soling sneakers, see "Outsole, Replacing."
Retro
Sneakers worn by Baby Boomers as serious athletic shoes but worn by their teenagers for kicks. Frequently seen examples include Chucks, Keds, One Stars, and Superstars.
RhynoSkin
A trademark used by ASICS for abrasion-resistant synthetic leather. Typically, ASICS will use RhynoSkin in the toe area.
RN
On an apparel label, the "Registered Identification Number" (despite being three words... it's not a "RIN"). A code number assigned to a apparel importer or manufacturer by the Federal Trade Commission (FTC). If one is trying to locate an importer or manufacturer's address, the FTC Web site provides a cross-reference from RN to name and address. Also see "WPL" for wool products.
Rodman, Dennis
Basketball player who once endorsed Nike and then Converse shoes. He played with Michael Jordan before Michael retired. Living example of the dangers of falling asleep in a tattoo studio. Sometimes nicknamed "D-Rod."
ROM

Adidas track training sneaker issued in honor of the 1960 Summer Olympics in Rome. Most software weenies and other geek types instinctively think "Read-Only Memory" when confronted with this name.
ROOS 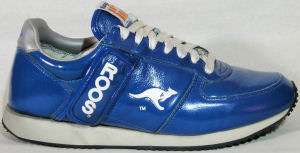 Another name for KangaROOS sneakers.
Rubber
The typical outsole material for sneakers. Provides the best mix of traction and durability. Tires use rubber for the same reasons.
ROY G. BIV
A mnemonic (sometimes put to words as "Richard Of York Goes Battling In Vain", particularly by readers from the United Kingdom) used to remember the colors of light in the rainbow in order by wavelength: "red, orange, yellow, green, blue, indigo, violet." Some hyper-organized physics majors arrange their clothing and sneakers like software weenies do with the Resistor Color Code.
Rudy, Marion Frank
One-time aerospace engineer at what was then North American Rockwell; the aerospace businesses of what is now known as Rockwell Automation were sold to Boeing in 1996. In 2005, Boeing turned around and sold the Rocketdyne Power and Propulsion business unit. Issued US Patent 4219945 for inventing what is now known as Nike AIR. Reportedly, he first pitched the patent to adidas; they had no interest in what might have been "adidas air." He also received US Patent 4271606 and US Patent 4340626 for enhancements to the basic Nike AIR design.
Run
An activity performed by runners. Determining (either cross-country or on a track) how fast the sneakers allow their user to move.
Run DMC
Rap group famed for their three-stripe sneakers. Specifically, "My adidas."
"Run Faster... Jump Higher"
The reason Baby Boomers asked their Mom to buy them a pair of PF Flyer sneakers. Also, their slogan.
Run from Run DMC
What anyone with musical taste does with Their adidas. (Also see "Run DMC." Please, not in concert.)

Runners
Running
A track meet where the only opponent is the clock.
Running Shoes
Athletic shoes designed for running. These generally come in these categories:
Ryka
An athletic shoe company, noted for making shoes exclusively for women. They developed an inert gas cushioning technology using nitrogen.