This FAQ and Glossary defines a number of terms used in regards to athletic shoes, Charlie, or sneakers.

Mac
A line of overpriced personal computers made by Apple, Inc. They aim more at the desktop publishing and graphic arts industries. One can hardly get a Mac laptop for under $1000, while you can get a low-end laptop that uses Microsoft Windows for under $200 if you shop around. But the Mac is made out of aluminum and glass, while the low end Windows machine is made out of plastic and usually has a fan that sounds like it was subcontracted to Hoover. Nearly all the Mac computers have speedy solid-state storage, while many (but not all) Windows machines stick with the tried and true (but slow) rotating magnetic hard disk storage.
"Macht's mit Qualität"
A German-language slogan sometimes seen on Puma marketing material for their athletic shoes. Translation to English is "Do It with Quality." Interestingly enough, this predated the Nike slogan "Just Do It" by many years!
Mail Order
An alternative method of finding sneakers unavailable locally.
Important things to consider when shopping:

Mail Order suppliers that I've dealt with, been satisfied, and who handle a number of brands:

Mail Order suppliers that my readers have rated highly, BUT I've had no experience with them: 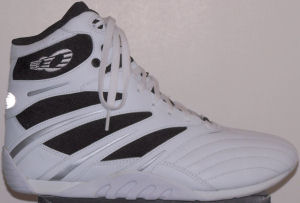 Athletic shoes worn for various types of stylized, (usually) unarmed combat. Depending on the particular flavor of martial art, adherents may participate in anything from bare feet to shoes with uppers higher than basketball high-tops.
Massachusetts
Formally, the "Commonwealth of Massachusetts.." Informally, "Taxachusetts." A state in the Northeastern part of the United States. World famous as the home of the Charles Stark Draper Laboratory, the Massachusetts Institute of Technology, and excessive taxes. Possibly the center of the sneaker universe, despite Nike being in Oregon. Athletic shoe companies that call Massachusetts home include Converse, Etonic, New Balance, Reebok, Saucony, and Stride Rite (whose brands include Keds and Sperry Top-Sider). Massachusetts also hosts the United States distribution office for Puma.
Medial Post
A construction detail found in some running shoes. It involves placing a reinforcing structure (made of EVA or PU) on the inside edge of the shoe. It is typically used in motion control shoes to limit pronation.
Men
mi adidas
The adidas custom design offering; think NIKEiD with three stripes instead of a SWOOSH.
Midsole
The portion of the sole between the outsole (the outside) and the insole (where the foot or sock rests). Made from some type of cushioning material. Traditionally (as is still the case with Chucks), the cushioning material was foam rubber. Now, it is generally EVA or PU.
Mid-Top 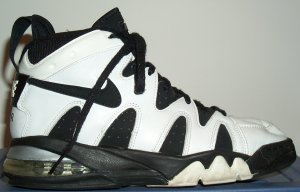 An athletic shoe whose sides extend upward to partially support the ankle area. A mid-top does not provide the near-omnidirectional ankle support of a high-top. To compensate for this deficiency, a mid-top also does not provide the near-omnidirectional mobility of a low-top.
MIL-S-21257
A United States military specification (no longer used), entitled "Shoe, Basketball: For Reconnaissance." The sneaker equivalent of the $800 hammer of Congressional hearing fame. The United States Marine Corps didn't use ordinary Chucks for their sneaking around... they had their very own camouflage high-tops! The shoe closely resembled the PRO-Keds canvas basketball sneaker. One of the requirements called out for the shoe was that a pair in size 8 must measure on the inside at least 5" from the top of the insole to the top of the shoe. Another was that the shoe had to have Buick Ventiports on both the inside and the outside.
MIL-S-43961
A United States military specification that describes a commercial gym shoe in great detail. For those who want sneakers like the military: go buy a pair of unbleached white low-top Converse "Chuck Taylor" All Star sneakers.
Mique
A Nike women's basketball shoe that is named after Chamique Holdsclaw of the Washington Mystics.
Miserable Failure
Michael Moore's Fahrenheit 9/11 was a miserable failure if he thought it was going to throw the 2004 election!
Missing Shoes
If there are any shoes you consider important that are missing, please send me comments and pictures. I (Charlie) reserve the right to disagree.
Modem
A piece of (mostly) computer hardware, usually a nondescript black box with blinking lights on it that comes from the cable or phone company, that converts one form of signal to another. Though, in some telecommunications equipment, one is built in. Usually used to get on the Internet but since 2009, television has used a receive-only modem to get data. Usually put in a corner and forgotten until something happens amiss.
Monkey Paw
A Nike design incorporating plastic outriggers molded to the upper. The basic concept is described in US Patent 5896683.
Motion Control Shoes
A subset of running shoes designed to avoid pronation; usually mutually exclusive with lightweight shoes. The design include various techniques, such as a medial post.
Mule

A type of sneaker that's missing the heel... probably inspired by those who kept trying to wear their shoes without really putting them on.
My Addidas
Song found only in misspelled discographies of the rap group "Run DMC." See "My Adidas."
My Adidas